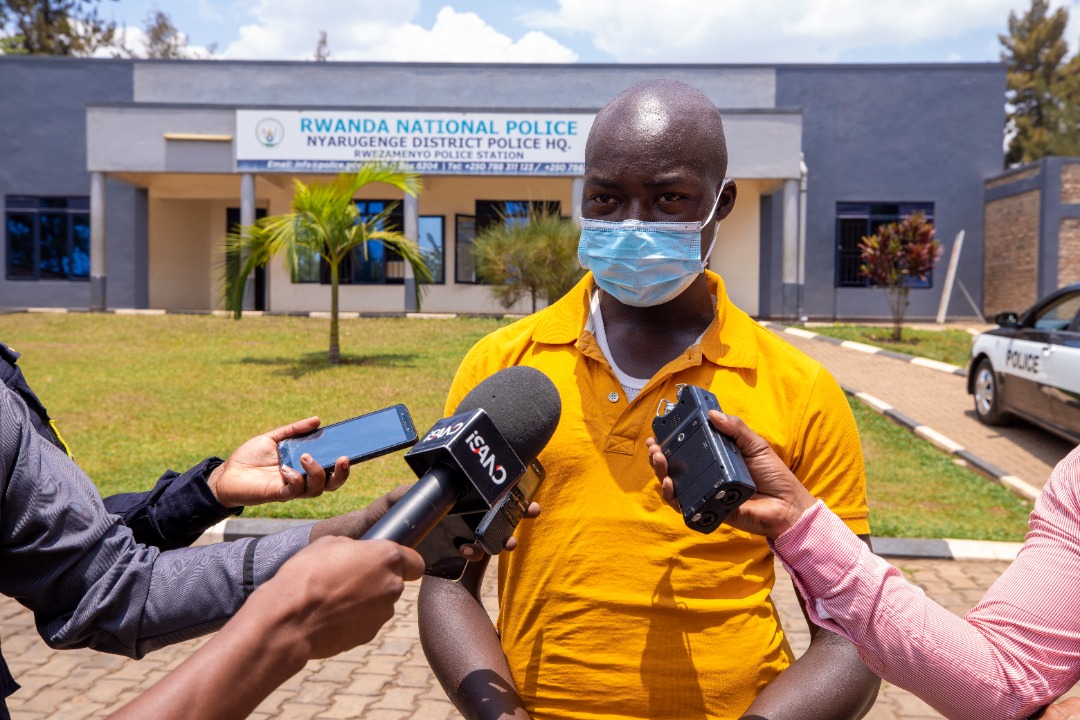 A 19-year old man identified as Elie Uwizeyimana has been arrested in Rusizi District for allegedly fleecing a man in Kigali of over Frw300, 000, which was fraudulently withdrawn from his mobile money account.

Uwizeyimana was arrested on Friday, September 11, in Njambwe village, Gatare cell, Nkungu sector in Rusizi District where he has been hiding.

He was showed to the media on Monday, September 13, at Nyarugenge District Police Unit (DPU) offices in Rwezamenyo Sector.

His arrest followed a theft complaint reported by the victim identified as Abby Nizeyimana, a resident of Kimihurura in Gasabo District.

Uwizeyimana said that he had been in this criminal business for a while after he was recruited by other two people.

“I was recruited by my friends; Jean Ndayisabye and Frank Mwiseneza... they are my senior this field. I was arrested on September 11, at about 11am,  after I defrauded a man of Frw307,778 from his mobile money," Uwizeyimana said.

He explained that he first sent a fake message to Nizeyimana indicating that he had received Frw45,000 on his mobile money account.

"I guised as an employee of MTN and called him to wire back the money he had allegedly received in his mobile account mistakenly.

I threatened him that if he fails to follow the instructions to return the money, he later obliged and followed all the instructions we were giving him on phone, which enabled us to access his account and to transfer all his money amounting to Frw307,778, to our mobile account,” Uwizeyimana narrated.

He revealed that he belongs to a racket that calls itself ‘Aba-men’ which he joined last year.

Uwizeyimana recalls eight people, who he has defrauded in the same scheme to a tune of over Frw1.3 million since last year.

The victim Nizeyimana also said that he fell prey to Uwizeyimana's criminal game after he threatened him that he would block his mobile money account.

“I received a message on July 23, that I have received Frw45,000 on my mobile money account. Shortly after, received another message that my telephone has been locked. Within that time, I got a call from someone, who claimed to be an MTN staff, he instructed me to follow his instructions and steps to refund the money and to unlock my account. That is how theh ended up defrauding me," Nizeyimana narrated.

“This is one of the suspect who are wanted over series of fraud and based on complaints from some of the victims," CSP Africa said.

He called upon the public to always exercise vigilance before engaging in any transaction.

Article 174 of the law determing offenses and penalties in general, states that; any person who, by deception, obtains another person’s property, whole or part of his/her finance by use of false names or qualifications, or who offers positive promises or who threatens of future misfortunes, commits an offence.