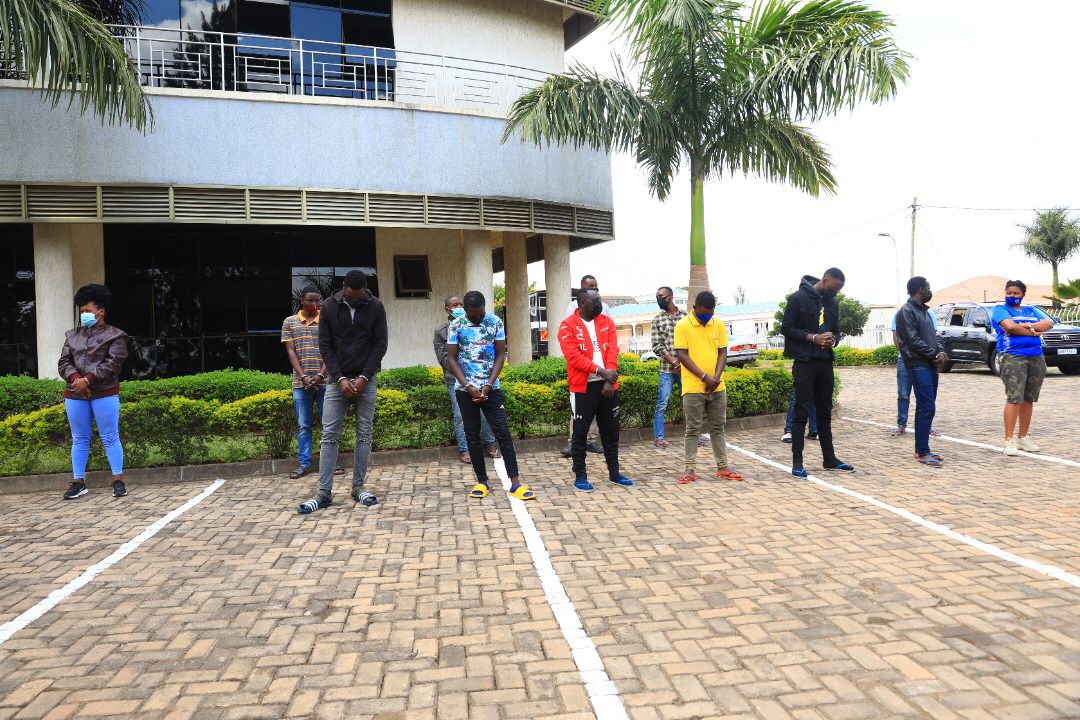 The group was paraded to the media this Wednesday, November 24, at Kigali metropilitan headquarters in Remera, Gasabo District.

They are all football fans, who were attempting to enter into Kigali stadium in Nyamirambo to watch the match between Rayon Sports and APR.

The test results indicated that they were Covid-19 negative, which is one of the conditions set by the Ministry of Sports for anyone that wishes to enter into stadiums to watch football games. Evode Nkunzimana, a taxi-moto operator, is one of the football fans arrested with a fake RBC message indicating that he had taken a Covid-19 test and was negative.

“Before the match, at about 2pm, I was transporting a fan from Kicukiro to Nyamirambo, who assured me that there is someone, who could help me to get the RBC Covid-19 negative test message, which was required for one to watch the match. I paid Frw1, 000 to that man to send me the message, although he claimed that others were paying him Frw5, 000. I was arrested at the entry of the stadium," Nkunzimana explained.

RNP spokesperson, Commissioner of Police (CP) John Bosco Kabera said that the force and other partner institutions are aware of individuals that attempt to forge Covid-19 results and certificates so as to access or acquire certain services.

“A number of people have been arrested since September for forging and using fake Covid-19 negative test results and certificates. Like those arrested before, these 15 people did not go for Covid-19 test and decided to take the criminal route where they ended up in the long arm of law," CP Kabera said.

He warned that although the Covid-19 guidelines have been eased to facilitate various services to resume, it does not mean enforcement and other concerned agencies have also relaxed to give room for such criminal practices.

Article 276 of the law determining offences and penalties in general states that any person, who in any manner, forges or alters documents by forged  signature or fingerprint, falsifying documents or signatures or impersonation, forging agreements, its provisions, obligations, or discharged obligations, commits an offence.