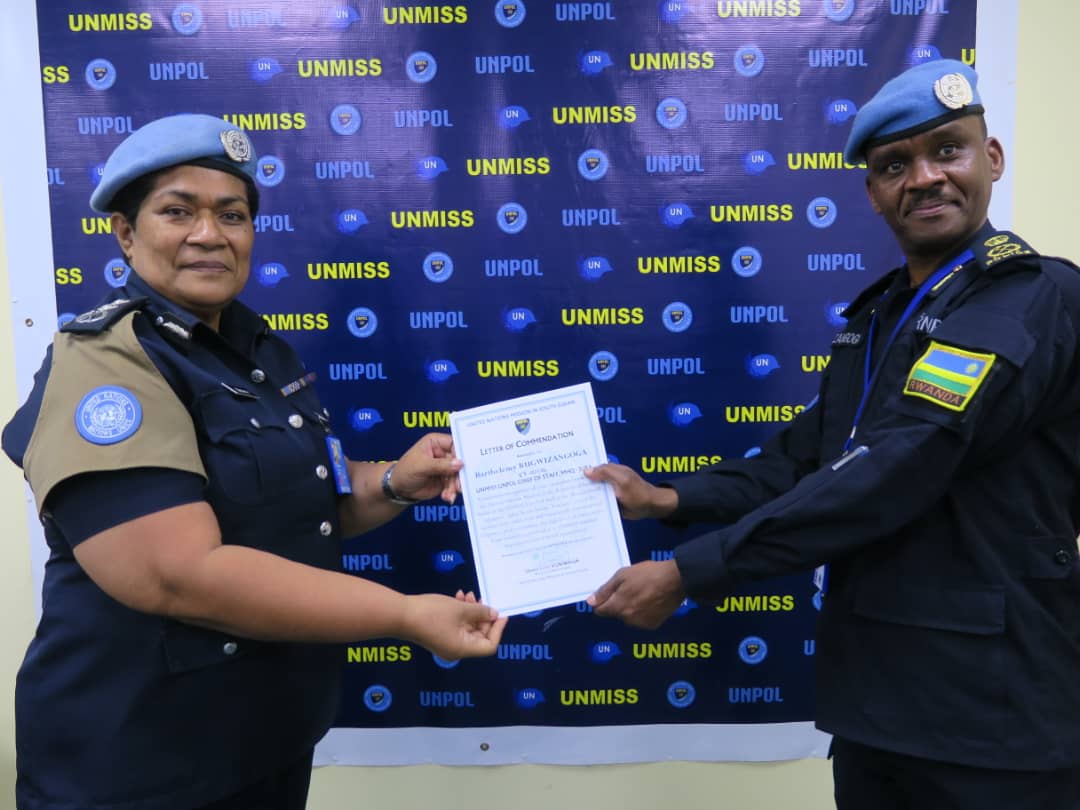 The Police component of the UN Mission in South Sudan (UNMISS), on Thursday, September 2, officially bid farewell to its Chief of Staff, Rwanda's Assistant Commissioner of Police (ACP) Barthelemy Rugwizangoga, who has concluded his tour-of-duty after two-and-half years of service in the world's newest nation.

The Police Commissioner for the UNMISS Police component, Unaisi Lutu Vuniwaqa thanked ACP Rugwizangoga for his immense contribution to the mission towards peace and security in South Sudan.

In a 'Letter of Commendation' she awarded to the outgoing Chief of Staff, the Police Commissioner described him as a professional and competent person.

"... awarded in recognition of your exemplary service to the United Nation Mission in the Republic of South Sudan as the UNPOL Chief of Staff. You have served the mission with distinction and consistently demonstrated diligence, professionalism and high level of competence.

Your valuable contribution to UNMISS mandate implementation is much appreciated," Madam Vuniwaqa said in her Letter of Commendation awarded to ACP Rugwizangoga.

She wished him all the best in all his future endeavors.

Letter of Commendation is the highest award given to a peacekeeper recognized for exemplary service.

ACP Rugwizangoga, in his farewell message, thanked the UNPOL leadership for the guidance and support.

He also thanked the Government of Rwanda and the Rwanda National Police (RNP) leadership in particular for seconding and sending him to serve in UNMISS in the name of peace.

The outgoing Chief of Staff further thanked the staff in his office as well as all Police peacekeepers for their "hard work and team work" to serve the people of South Sudan.

'We worked and delivered as a family where everyone was always committed to achieve the mandate as a team and one family.

It was a pleasure knowing and working with you. I encourage you to continue to deliver to the mandate and take UNMISS and UNPOL to another step in terms of building durable peace in South Sudan," ACP Rugwizangoga said.

He also invited them to visit Rwanda.