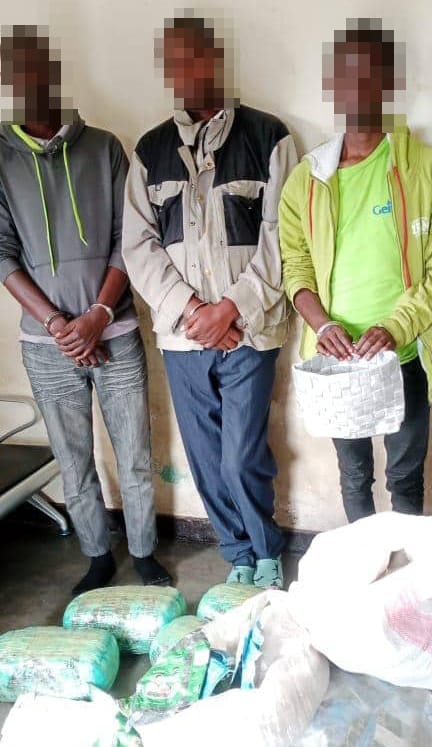 The Rwanda National Police (RNP) Revenue Protection Unit (RPU), on Saturday November 19, arrested three, who allegedly connived to traffic 16kgs of cannabis from Rubavu District to the City of Kigali.

The suspects include the driver of the bus in which the narcotics were being trafficked, identified as Samuel Nkuranga, 51; Claude Ndangamura, 57, who cleared the luggage of cannabis onto the bus, and one Fabrice Habyarimana, 21, who loaded the illegal luggage.

Chief Inspector of Police (CIP) Mucyo Rukundo, the Western Region Political and Civic Education Officer (RPCEO) said that the forth suspect run away when the bus was stopped at a checkpoint in Nyamwishyura Village, Nyarushamba Cell in Nyakiliba Sector, at about 7p.m.

"The illegal luggage was loaded on the bus in Mahoko bus park, heading to Kigali. Fortunately, some people in the bus park witnessed the whole scenario and the collaboration between the group, prompting them to call the Police.

A roadblock was mounted in Nyarushamba where the bus was stopped, searched and recovered sacks of cannabis in the boot weighing 16kgs. In the process, one of the passengers fled but three other people connected to the foiled drug trafficking were taken into custody," said CIP Rukundo.

They were handed over to RIB at Gisenyi station as the search for other suspected accomplices is still underway.

The Ministerial order nº 001/MoH/2019 of 04/03/2019 establishing the list of narcotic drugs and their categorisation classifies cannabis in the category of "very severe narcotics.’’

Upon conviction for very severe narcotics, the offender faces between 20 years and life imprisonment, and a fine of between Frw20 million and Frw30 million.