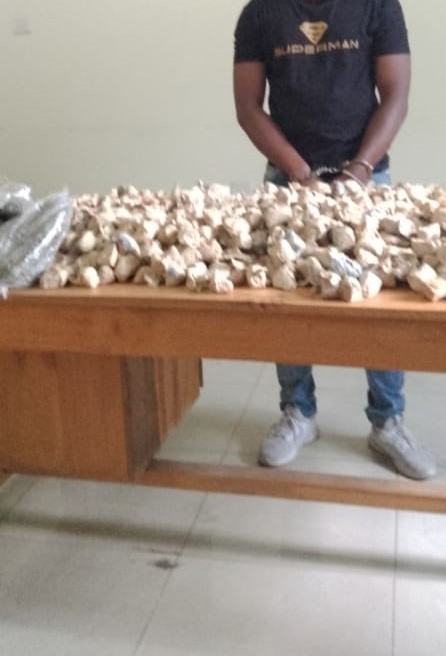 Fidele Twahirwa, 32, could have succeeded before to traffic narcotics into Rwanda but his luck run out on Saturday, May 7, when he was arrested at his home in Gabiro Village, Buhaza Cell, Rubavu Sector in Rubavu District with 1,019 pellets and 2kgs of cannabis.

He was arrested by the Rwanda National Police (RNP) Anti-Narcotics Unit (ANU), which has been trailing him following information from residents about his criminal activities.

The Western region Police spokesperson, Superintendent of Police (SP) Bonaventure Twizere Karekezi said that the suspect had allegedly trafficked the narcotics into Rwanda from the Democratic Republic of Congo (DRC).

"Twahirwa sneaked the narcotics into Rwanda from DRC on Friday through Lake Kivu. ANU got credible information on Saturday that he had also hired a vehicle to traffic the narcotics to Kigali, but he was arrested at his home with 2kgs and 1,019 rolls of cannabis," said SP Karekezi.

Twahirwa is a recidivist, who was released six month ago after completing his sentence for the same crime at Mageragere prison.

SP Karekezi commended the resident, who shared information leading to the arrest of the suspect.

"Twahirwa is one of many drug dealers, who have been arrested because of the strong cooperation and collaboration with the public, who report them," the spokesperson said.

The suspects was handed over to RIB at Gisenyi station for further investigations and legal process.

Article 3 of the Ministerial order nº 001/moh/2019 of 04/03/2019 establishing the list of narcotic drugs and their categorisation classifies cannabis in the category of very severe narcotic drugs.

Article 263 of the law No. 68/2018 of 30/08/2018 determining offences and penalties in general, states that any person who, unlawfully produces, transforms, transports, stores, gives to another or who sells narcotic drugs and psychotropic substances, commits an offence.

In case of "very severe narcotic drugs" the offender is liable to between 20 years and life imprisonment and a fine of between Frw20 million and Frw30 millions.