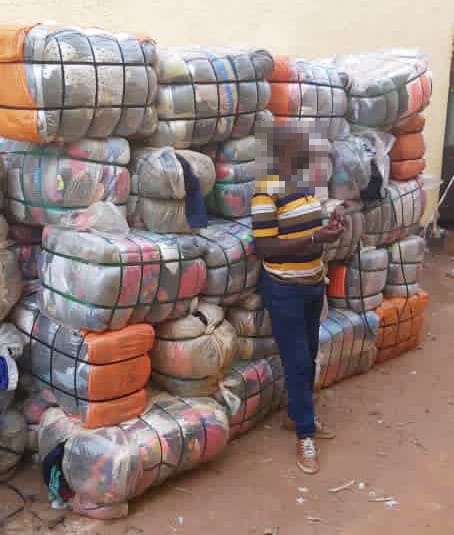 The Revenue Protection Unit (RPU) has impounded at least 1574kgs of second-hand clothes in Nyanza District that had been smuggled into Rwanda from the neighboring Burundi through a porous border point.

The bales of used clothes were recovered on Thursday August 4, at about 4pm, from the stock of one Jean Pierre Ndayambaje, 52, located in Kigarama Village, Nyanza Cell, Busasamana Sector.

Ndayambaje was also arrested in connection with the alleged smuggling and fraud.

“RPU had received information from residents in Kigarama village about goods that Ndayisaba had stockpiled in the house located in the same village.

RPU in partnership with area local leaders searched that house and recovered sacks of second-hand clothes weighing combined 1574kgs. Ndayambaje, the suspected rightful owners of the clothes, was also arrested at the scene. It is suspected that Ndayambaje was smuggling the clothes into Rwanda from Burundi through illegal border points and mainly supplying retailers in Nyanza market," SP Kanamugire said.

The spokesperson commended the role of the general public in fighting smuggling and crimes in general.

The specifies that seized smuggled goods are auctioned. A taxpayer, who commits fraud, is also subject to an administrative fine of one hundred percent (100%) of the evaded tax and a likely imprisonment of between six months to two years.