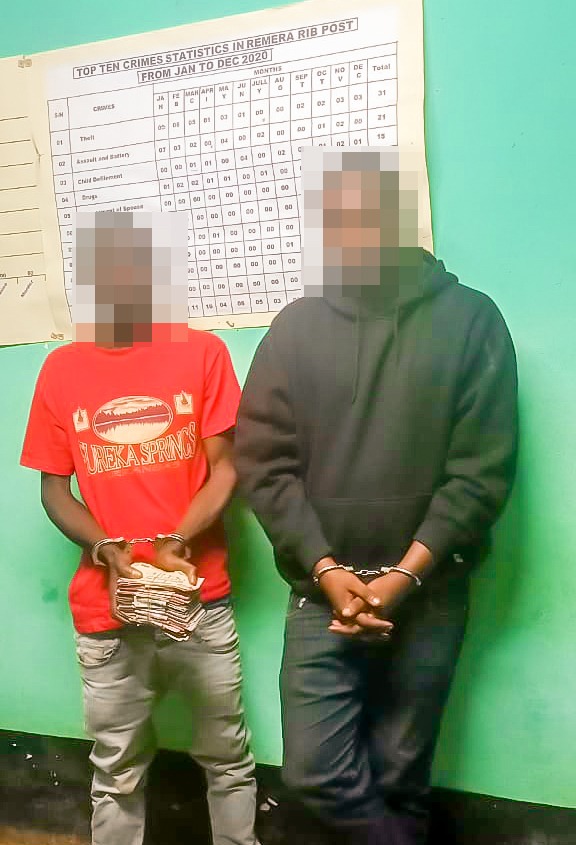 On Friday, September 30, Police in Ngoma District recovered over Frw1.5 million, which was stolen from a shop in the same district in Rurama Cell, Rukira Sector.

The money, which is part of Frw2.5 million that was stolen earlier the same day, was recovered from two suspected thieves, who were arrested later at about 7pm, in Kabeza Village, Kinunga Cell in Remera Sector.

Superintendent of Police (SP) Hamdun Twizeyimana, the Police spokesperson for the Eastern region, said that the two suspected thieves were traveling in a private vehicle, which was also impounded.

"On Friday, at about 7pm, two men identified as Sasha Bizimana, 34, and Elyse Mutuyeyezu, 28, entered in a shop located in Buliba Village, Rurama Cell of Rukira Sector, guising as clients," SP Twizeyimana said.

One of the suspects, he added, started bargaining for some goods as a way to disrupt the trader while the other stole the bag that contained the money.

"The victim realized shortly after that he had been robbed, suspected the two men, who left in a private car without buying anything, and called the Police.

The vehicle was spotted and intercepted in Remera Sector along Ngoma-Kayonza highway, where the two men were arrested about an hour later. At the time, they were found with only Frw1,584,000. They were handed over to RIB for further investigations," the spokesperson explained.