The IGP and other senior officers during a meeting with police officers operating in the Eastern region (Photo: RNP Media Center)

The Inspector General of Police, Emmanuel K. Gasana has started a tour of regions to evaluate the force’s activities and improve service delivery.

The five-day tour started in the Eastern Region on Monday where he met officers operating in the seven districts that make up the Eastern Province. The meeting was held at the police regional headquarters in Rwamagana District.

The IGP challenged the officers to lay strategies to prevent road accidents and fight other crimes like drug abuse, which are relatively still high. 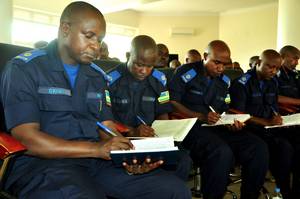 “Be professional officers, offer quality services to those that come to you and solve their problems in time and demonstrate good conduct in your duties,” the IGP said.

He urged them to desist from all sorts of malpractices like corruption, drunkenness, which he said does not depict qualities of a professional officer and the force in general and have negative effects to the force and the country in general.

The Eastern Region Police Commander (RPC) Chief Supt. Eric Mutsinzi said they are on track in implementing the force’s priorities such as fighting corruption, building a police-public centred force and promoting road safety, among others.

The Police Chief will continue his tour in the Northern region on Tuesday.