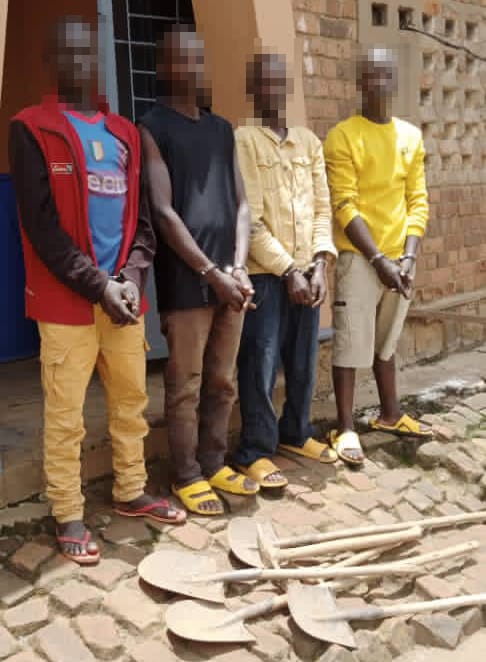 Rulindo is one of the districts in Rwanda that are rich in minerals and where related illegal practices are conducted.

Through partnership with the local communities in Rulindo, Police has continued to make headways against these unlawful activities and illegal have been dealers arrested.

In an operation conducted on Tuesday, September 27, four people were arrested in Masoro Sector,  Kivugiza Cell in Musega Village where they were destroying people's gardens searching for minerals.

Those arrested are AsumanMusitafa, 19, Jules Nsengimana, 32, Jean Claude Tuyisenge, 44, and Innocent Hategekimana, 19. They were handed over to RIB for Murambi station.

Police also seized from the suspects, tools including hoes, spades and pick mattock which they were using.

"These illegal mining practices were reported by the affected residents, whose farms were being destroyed. Mining is done in authorized areas by licensed people or companies, and so is mineral trade.

Those conducting mineral exploration illegal will be arrested, and we urge the public to continue reporting such people," SP Ndayisenga warned.

He further warned residents against entering in closed concessions, which is dangerous and life-threatening.