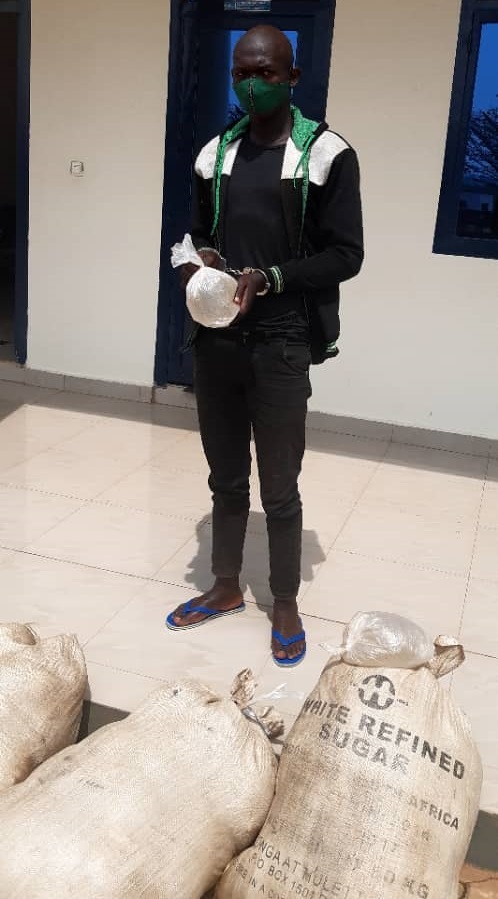 On Friday, January 7, at about 2am, the Rwanda National Police (RNP) Anti-Smuggling and Organized Crimes unit (ASOC) has seized 185 litres of kanyanga, a banned illicit gin, and 140 pellets of cannabis from dealers in Nyagatare and Rulindo districts, respectively.

The 185 litres of the crude gin were seized from the dealer identified as Evariste Nsengiyumva, who was arrested on Friday, January 8, in Cyondo Village, Kabungo Cell in Kiyombe Sector.

One Eric Itangishatse, 20, was also apprehended the same day in Rwintare Village, Gako Cell, Rusiga Sector of Rulindo District with a bundle containing 140 pellets of cannabis.

In Nyagatare, Nsengiyumva said that together with his two accomplices, they sneaked the illicit gin into Rwanda from Uganda.

"I was with Kiboyi and Uwizeye transporting kanyanga on bicycles from Uganda but they run away when Police stopped us in Cyondo Village," Nsenyiyumva said.

The Eastern region Police spokesperson, Chief Inspector of Police (CIP) Hamduni Twizeyimana said that the suspects were reported by residents.

"When residents called the Police reporting people, who were trafficking kanyanga from Uganda; Police intercepted them but two of them managed to run away abandoning kanyanga but Nsenyiyumva was arrested in the process," CIP Twizeyimana said.

Meanwhile, in Rulindo, the Acting District Police Commander, CIP Pacific Semahame Gakwisi, said that Itangishatse was apprehended as part of Police operations against trafficking and selling of narcotic drugs.

"Itangishatse was arrested at a Police checkpoint, which was mounted in Rwintare Village along Musanze-Kigali highway. He was traveling in a commuter and had concealed the narcotics in his bag," CIP Semahame said.

Following his arrest, Itangishatse disclosed that this was his second time to traffic cannabis from Musanze District to supply his clients in City of Kigali. He added that he is supplied by other dealers, who operates around Musanze taxi-park.