Police participates in campaign to end Violence against Women and Girls 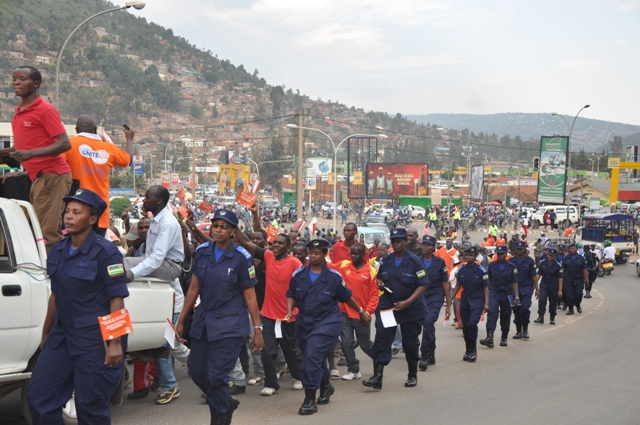 Rwanda National Police yesterday joined hundreds of youths in Kigali City in a clourful event that was part of a national campaign to end violence against women and girls.

The event was marked by a street march from the Metropolitan Police premises to Kimisagara Youth Center in Nyarugenge district.

The campaign, with a focus on ending violence against women and girls in public places, was organized by Rwanda Women Network and the City of Kigali. It is funded by UN Women Rwanda Office.

Diana L. Ofwono, the UN Women Rwanda Representative, was pleased that the government of Rwanda has embraced the campaign, but she particularly, thanked His Excellence the President of Rwanda, Paul Kagame, for his personal commitment and continued support in empowering women and girls as well as advocating for their rights.

“Rwanda is one of the few, if not the only one in the world, where I have witnessed a girl or woman walking without the danger of harassment at midnight at all, but a few areas,” she said.

She however appealed to the public, to play a greater role in the fight against the violence.

Rwanda National Police has committed to spearhead the campaign and also remains a strategic partner, not only in Rwanda, but on the continent.

Rwanda has been chosen to be home for the continent’s anti-Gender Based Violence Secretariat dubbed “Africa’s Centre for Security Organs Coordination of Action to end Violence Against Women and Girls (AFSOCCA-VAWG).

On May 23, 203, the United Nations Secretary General, Ban Ki-Moon laid a foundation stone for the construction of the facility which will be constructed at the Rwanda National Police headquarters.