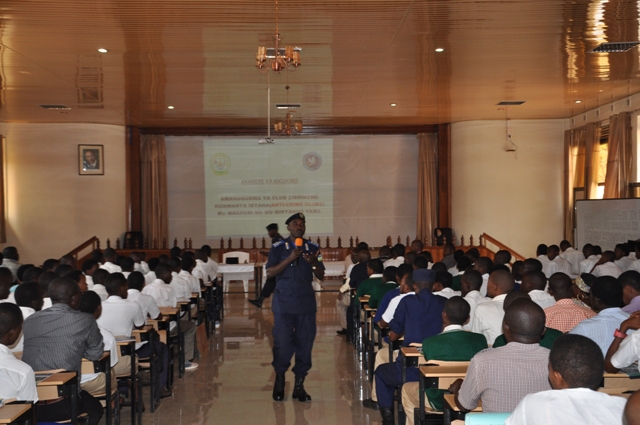 Two hundred and ninety six members of anti-crime clubs from secondary schools in Kicukiro District were on Friday given more skills and knowledge in fighting and preventing crimes.

The one-day training was organized by Rwanda National Police (RNP) as the force continues to capacitate its partners in fighting and preventing crimes.

The students vowed to use the acquired skills and knowledge to fight crimes and to spread the dangers associated with drug abuse and other crimes.

Abel Iyamuremye, the head of Kagarama Secondary School Anti-Crime Club said the training was important in understanding the type and nature of crimes.

“We are proud to be part of the fight against drugs and other crimes in schools.

We are proud to be to make a difference in our societies and it is a great honor to us to play a role in promoting safety in our country,” said a happy Iyamuremye.

He added that Anti Crime Clubs helps a lot in addressing crimes in schools such drug abuse, Genocide ideology and added that it’s important that such skills benefit all students to join together against all sorts of crimes.

“We (anti-crime clubs) normally give advice to our fellow students who are identified to be involved in particular crimes. In case they don’t listen to us, we consult Police and the school administration,” he explained.

The course tackled major issues such as drug abuse in schools, the role of youth in the country’s development, the clubs-police partnership and child abuse.

Florence Uwayisaba, the Kicukiro vice Mayor finance and economic development said the training is of great importance in especially in fighting the scourge of drug abuse, which is still high among the youth.

Security, she noted, shouldn’t be left to Police alone but “every Rwandan should have a shared responsibility.”

She called upon the students to stand up against such illegal acts and to concentrate on their studies, and to pass the acquired skills to their colleagues.

Assistant Commissioner of Police Theos Badege, the Rwanda National Police Spokesperson and the Commissioner for Public Relations and Community Policing, asked students to say no to drugs and anything that may mislead them and stick on studies which is their primary focus.