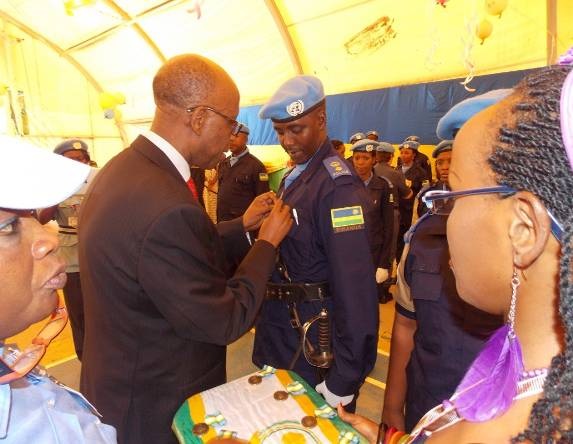 Speaking at the event, Ambassador MUTABOBA recalled, “Today as we join you in recognition of your valuable contribution to the implementation of the UNAMID mandate, you can take pride in the fact that you have represented your country well and you have served the African Union and United Nations with honor and selfless sacrifice in Darfur which is in need of peace, reconstruction and development”. 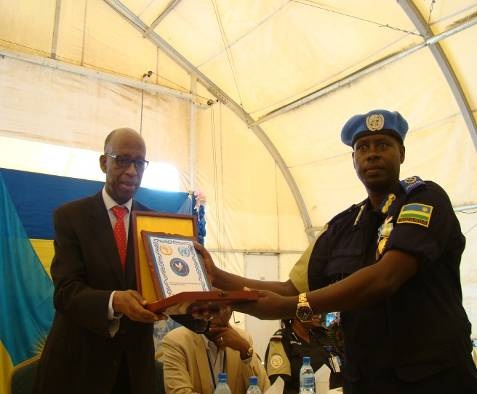 Paneras commended officers for their exemplary hard working and discipline during their duty and urged them to continue pursuing the cause of peace in Darfur.

She appealed to female Police advisors to help internally displaced women subjected to sexual and domestic abuse among others.

Assistant Commissioner of Police (ACP), Elias Mwesigye, the Rwandan contingent Commander congratulated the medalists and requested for a minute of silence in the memory of those who lost their lives in serving Darfurians.

He, then reminded that the medalists joined the mission in June and October 2012 and serve well where deployed, adding,” Rwanda is now leading over other countries in having a big number of female police officers in Darfur, and to him, “This number is a great contribution to peace attainment for Darfur. The awards are a proof that Rwandan contingents accomplish their duties and responsibilities”.

And on behalf of the IGP, the contingent Commander thanked everyone present at the ceremony and congratulated medalists and urged them to maintain their discipline and resist from deviance.