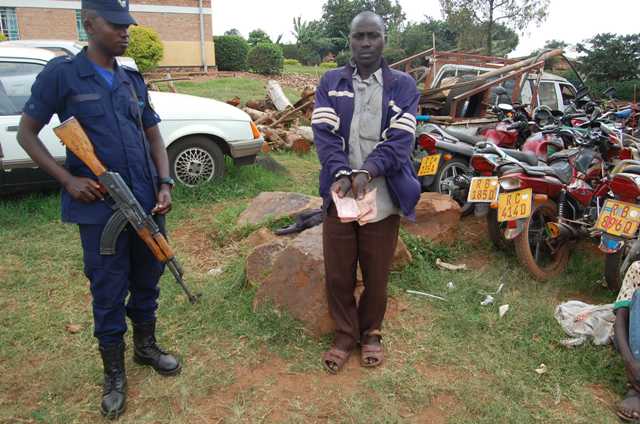 Munyabazungu Nshimiye, 37, handcuffed, could get a jail term of up to 5 years for bribing an officer (Foto: RNP Media Center)

The suspect, a resident of Byimana cell, Ndego sector, wanted the commander to release his cousin, Jean Damascene Habumugisha who was arrested on Tuesday on suspicion of drug dealing.

The commander denied the offer and instead arrested the man on spot.
Munyabazungu and his cousin are all now held at Kabarondo Police station for further investigation.

He also reminded the public that, “Prevention and fight against all sorts of corruption should be each and everybody’s responsibility, not Police role’s only because it impedes on not only the image but also the economy of the country.”
If found guilty, the suspect could face a jail term  of up to seven years and a fine of twice to ten times, the value of the bribe he intended to offer.