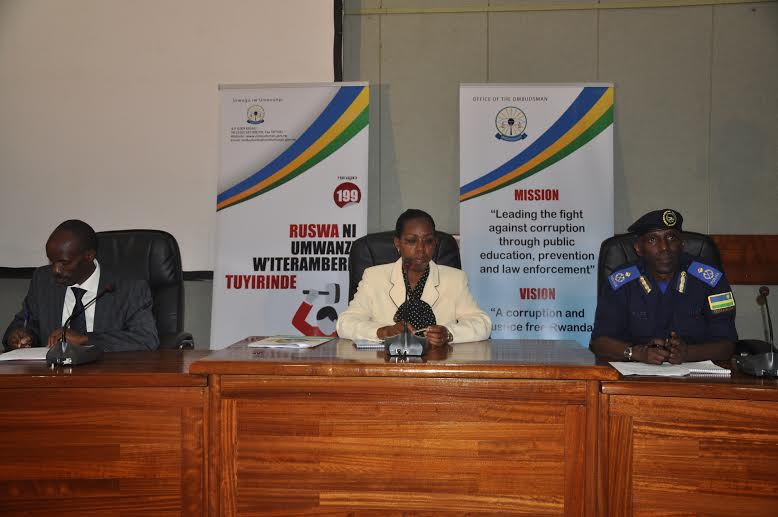 The Rwanda National Police and the Office of the Ombudsman conducted a live talk-show on Sunday with a call for the public to give no mercy to anyone involved in graft-related tendencies by reporting them to concerned authorities.

Speaking during a talk show held at telecom house, which was live on Rwanda television and radio, the Chief Ombudsman, Aloyse Cyanzaire warned leaders who solicit bribes from people that come to them to seek services.

"Leaders should know that they are holding those offices not to serve their selfish interests, but rather the interests of the public. They are paid by the public and they should treat them with respect, give them quality services with no condition," Cyanzaire said.

Though Rwanda has continued to display a better performance on the international scene in the campaign against corruption, the Chief Ombudsman challenged Rwandans to unite against what she called "an evil to the economy" to fight the cases that still exist.

"Corruption  gives illegal opportunities to the very few and dinies legal chances to the most majority, thus hindering vast individual development and the country in general," she observed.

ACP Damas Gatare, the Commissioner for Public Relations and Community Policing in RNP said various strategies have been laid within the force to fight and prevent graft.

They include electronic policing especially in the traffic department where driving licence seekers now register online and limits contacts with police officers, and the establishment of the 'anti-corruption unit.'

Corruption is zero tolerance in Rwanda National Police and any officer caught in the act faces heavy disciplinary actions, including discharging them from the force.

He thanked the Office of the Ombudsman and Transparency International-Rwanda for their partnership to fight the vice in the country, and called upon Rwandans not to buy services they are legally entitled.

"It's time for all Rwandans to stand up for their rights, fight this vice through community policing, report such cases," he appealed.