Kagame on Mandela: ‘A politician capable of the remarkable’ 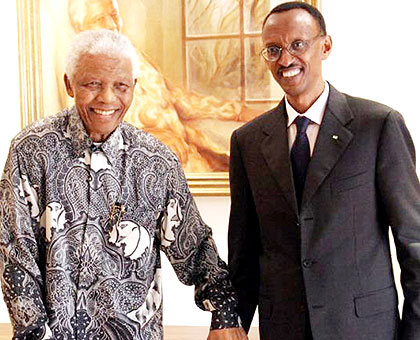 President Kagame and the late Mandela meet in Johannesburg in the past. The New Times/ Village Urugwiro.

Few were less comfortable with the prospect of sainthood than Nelson Mandela himself. “One issue that deeply worried me in prison,” he wrote in Conversations with Myself, a collection of his writings published in 2010 “was the false image that I unwittingly projected to the outside world: of being regarded as a saint. I never was one, even on the basis of an earthly definition of a saint as a sinner who keeps on trying.”

A rush to secular canonisation would squander Mandela’s memory to unquestioning adulation. If we are to learn from his extraordinary legacy—and, as leaders, to act on what we learn—we are surely obliged to reckon fully with its layers and nuance. Symbolism must not crowd out substance while we reflect on the depth and range of Mandela’s contributions, to South Africa and to the world.

Take as an example his legendary refusal to exact revenge on those who imprisoned and humiliated him during the apartheid years, culminating in the appointment of former white supremacist F.W. de Klerk as his deputy president. It is true that this was an act of admirable personal magnanimity, and a great testament to Mandela’s character.

But, as a straightforward matter of politics, it was also both pragmatic and necessary. No other path could have ensured South Africa’s viability as an incipient democracy under ANC rule, not to mention protect its short- and  long-term economic prospects.

In 1994, as the world cheered Mandela’s ascension to the South African Presidency, Rwanda emerged from a genocide that claimed more than a million lives.

For 19 years, Rwandans have repulsed the urge to vengeance and instead placed reconciliation at the heart of our journey towards national recovery and progress.

As with South Africa under Mandela, we concluded that the only path to healing and peace is to unequivocally reject—and never to replicate—the hatred, injustice and violence that inflicted our wounds to begin with.

Given the unjustified basket-case reputation that our continent attracts in some quarters, it is notable that Africa has produced two stories of national reconciliation and renewal. It is impossible to exaggerate the stakes for South Africa in the mid-’90s as the ANC took office. The Mandela government faced countless obstacles in 1994, including the real and imminent risk of economic collapse brought about by capital flight.

This would have been daunting enough for an experienced government, let alone one made up of newcomers who had, until recently, been shut out of the political process by the white minority. There was enormous pressure on the government to meet the long-repressed demands of an exhilarated but impatient population.

Meanwhile, investors and the world community looked on for signs that the majority black rule would inevitably engender instability and dysfunction.

It is to South Africa’s enduring benefit that President Mandela was able to lead his country—and his party—through this period of turmoil.

By applying his formidable skills as a communicator, politician and diplomat, he instilled confidence in his government and, by extension, in South Africa as a whole. Inevitably, the sky-high hopes and expectations of the population sometimes collided with the reality of managing a large, diverse and complex national economy.

The difficult task of setting priorities and making tough decisions meant that compromises were made and promises broken. The euphoria that accompanied the end of apartheid inevitably faded. But, for the duration of his stewardship, Mandela’s rock-steady hand kept the ship afloat and eventually guided it on to calmer seas.

There is no doubting Mandela’s virtues as a moral exemplar and inspirational figure. There is no modern leader who has done more to deserve the waves of praise and mourning that his passing has unleashed. But Mandela’s life’s work was, ultimately, politics. He worked for decades to advance his cherished political party, from exile to government.

He defied his political enemies for 27 years, but did not hesitate to sit down with them when the time came to negotiate. He understood the power of his celebrity which he used to great and lasting effect.

He never stopped striving towards concrete political ends; never missed a chance to plead his case or cause; never wavered from the struggle. To point out that Nelson Mandela was, above all, a politician is not to diminish his remarkable legacy, but rather to remind the world that politicians are capable of remarkable things.