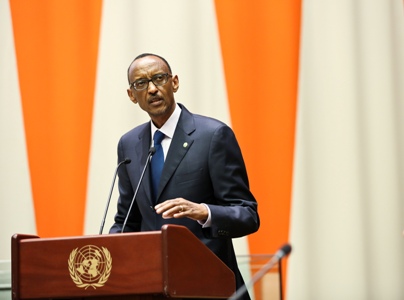 President Kagame at the UN General Assembly in New York, chaired the 4th meeting of the MDGs Advocacy Group meeting and MDGs Advocate Innovation Forum, gathered to examine the Advocacy Action Plan that will be implemented in the coming year.

With just 828 days to the 2015 deadline, many of the millennium development goals are yet to be fulfilled especially in many developing countries.

President Kagame expressed the need to accelerate the mobilisation and deployment of resources towards meeting the MDGs.

“MDG advocates should not allow progress made against absolute poverty to be lost to information poverty, as pockets of communities are left out because connectivity infrastructure is either absent, limited or too expensive. Over the last decade, we have observed that MDGs have been reached in countries with inclusive and accountable governance. They have however been delayed, where the MDGs were outside a domestic development agenda and not locally owned. And so the relevance and sustainability of development programmes can only be guaranteed by a nationally-driven process.”