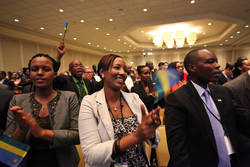 Kigali- 24 September 2013 - Toronto is set to host thousands of Rwandans and friends of Rwanda this coming Saturday in the fifth Rwanda Day since it began in Chicago. This is also the first time the event will be held in Canada.

Rwanda Day brings together Rwandans and friends of Rwanda living around the world to reaffirm their core national value of Agaciro celebrate the country’s progress and discuss ways of being part of Rwanda’s social-economic transformation.

It is also an opportunity for Rwandans to meet, interact and exchange views on their country and how they can contribute to the vision of a modern, unified and prosperous nation.

The day begins with a tour from various private sector and government exhibitors who answer questions ranging from: How can I buy and register land? Can I invest in real estate? How can I open a Rwandan bank account? As well, participants can buy Rwandan art and fashion, coffee or tea and many other Rwandan products.

President Paul Kagame, the guest of honour, always has a powerful message to deliver to participants, inspiring and challenging Rwandans living abroad to do their part to see Rwanda progress.

“Rwanda Day is not a day only, it is the spirit that brings us together, looking for the common good of the country and working together to achieve this,” said President Kagame at the recent Rwanda Day in London.

According to Parfait Gahamanyi, Director General of the Rwandan Community Abroad in the Ministry of Foreign Affairs, the event will be held under the theme “Agaciro: Investing in Our Future.”

He explained that Canada is especially important as there are many Rwandans living there. “We don’t have exact figures but there are between 13, 000 and 14, 000 Rwandans living in Canada. Holding the event in Toronto means the Agaciro message will reach many more Rwandans.”

The continuing relationship between Rwanda and Canada includes trade, judicial capacity building and cooperation within multilateral organisations such as the Commonwealth.

Trade between Canada and Rwanda hit $52.8 million in 2012. This was due to the sale of two Canadian planes to Rwanda – making Rwanda Canada’s largest trading partner in the Central Africa, that year.

In matters regarding the 1994 Genocide against the Tutsi, the Canadian Parliament in 2004, declared April 7 as a Day of Remembrance of the victims of the 1994 Genocide against the Tutsi. And on April 7, 2008, the Canadian Parliament unanimously adopted a resolution to designate April 7 as a Day of Reflection on the Prevention of Genocide.

Past Rwanda Day’s have been held in Chicago, Paris, Boston and London.