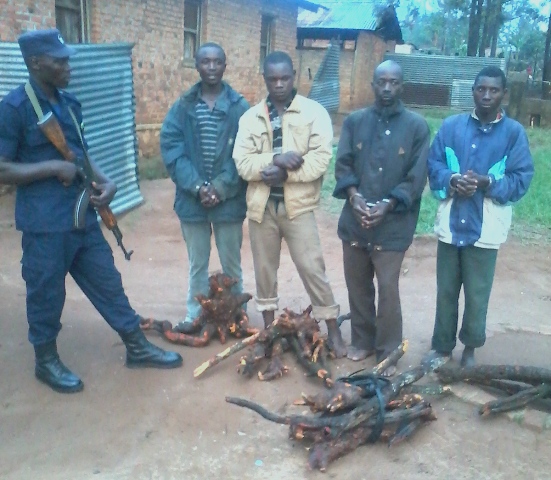 The suspects after their arrest (Photo: RNP Media Center)

The Eastern Region Police Spokesperson, Supt. Emmanuel Karuranga has warned members of the public in the province involved in poaching and cutting of trees, especially in forests and national parks, that they risk facing the wrath of law.

Supt. Karuranga disclosed that there are groups of people in the region, who have vehemently ignored repeated calls to protect the environment and are involved in poaching and cutting trees in protected areas.

He confirmed that some people said to be involved in such illegal acts, have been arrested including four apprehended on Sunday while hunting and cutting trees in Akagera national park.

Those arrested on Sunday are identified as Aboubakar Nsekanabo 27, Adrien Sindayigaya and Kassim Iradukunda both aged 18 and Damien Ndahayo 41.

The quartet had already killed an antelope, at the time of their arrest.

“In areas bordering national parks, there are people who still burn bushes, do hunting in these protected areas which others cut trees like umushikiri. We managed to arrest some of these people and those that are still in this illegal activity should stand warned,” Supt. Karuranga warned.

Umushikiri, mostly found in the Eastern Province, is a plant used as a raw material in the production of perfume and lotions.

The plants are said to be trafficked through neighbouring countries to Asia.

Article 416 of the penal code states that “any person who illegally sets fire to, cuts trees or who causes others to do so or kills animals in classified forests, protected areas and national parks, shall be liable to a term of imprisonment of six months to two years and a fine of Rwf300, 000 to Rwf2 million or one of these penalties.