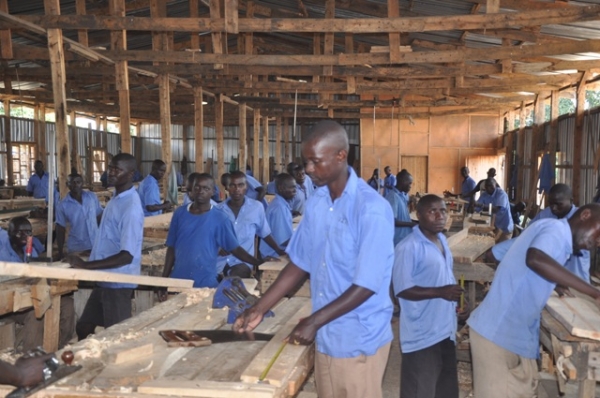 When the 23 year old, Clever Hakizimana was arrested for consuming drugs early last year, little did he know that that was his turning point to hope from impasse.

He was a drug addict, a thief, to mention but a few in his native village in Ruhango District.

In January last year, the former drug addict was apprehended together with other youth in the district, who were also dealing in drugs and taken to Iwawa Rehabilitation and Vocational Skills Development Centre (IRVSDC).

The centre provides a perfect blend of vocational, environmental, technical and soft skills to the trainees to prepare them become entrepreneurs ready to compete on the job markets. The career development services and quality training provided help the youth to outgrow the delinquency and assume productive roles in society.

“Smoking cannabis and inhaling petrol was my life and my hobby. That was my life. In short, I was living a hopeless life,” Hakizimana, narrated his past ordeal.

“Today, my life is the opposite. I have become a man, focused and I seeing a different future from what I used to see sixteen months ago,” he adds.

Since his arrival at the centre, he has been majoring in construction. He is part of the 655 other youth set to graduate at IRVSDC on June 15.

“What I am and feeling today…I wish it could benefit all those that still live a life I was living before. I have learnt a lot here and I am ready to reclaim my reputation back at home and in the village where they used to see me as nothing. Today, I am something. This is what I wish those that still involve in drug related crimes and other criminal acts, to have,” he says.

Like Hakizimana, Janvier Mbanza, who hails from Musanze District, another trainee at the vocational centre could not hide his praises for the centre and those that came up with the idea of establishing it.

“Those who have never been here can’t actually know the future it holds, especially for the youth involved in criminal acts,” explains a 30-year old Mbanza.

Mbanza was also a drug addict and it had forced him out of the university at Kigali Health Institute where he was in third year, pursuing to become a dentist.

Mbanza was taken at the centre at the request of his parents.

“Despite my bad behavior, my parents continued to love me and to wish me the best. They never lost hope in me. I can’t thank them enough,” the joyful Mbanza says.

“There is no future on streets, in drug consumption…except people looking at you as garbage and useless. I don’t wish to see anyone in the situation I was in before,” he says.

1921 youth are currently enrolled in different programmes at the centre.

A total of 2056 youths have graduated at the vocational centre since its establishment in 2010, majority of them former drug addicts and dealers, orphans and street children.

Today, the centre has become hope for parents and children. The youth are also taught how to read and write.

It also boosts of a health centre, recreational centres and psycho-socio rooms to help counsel the youth.

Nicolas Niyongabo, the coordinator of Iwawa called upon parents to help their children as they embark on their normal life.