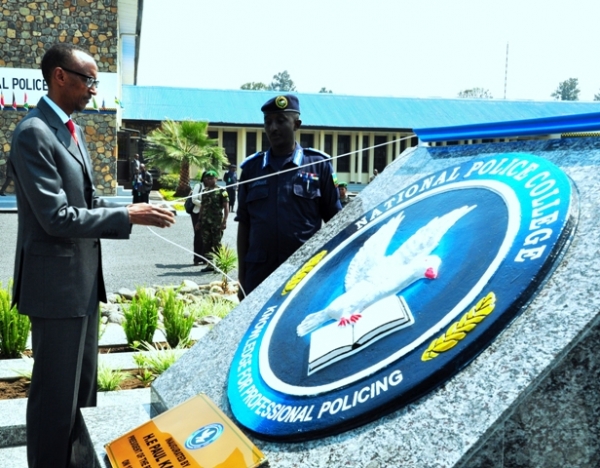 President Paul Kagame on Monday inaugurated a National Police College (NPC) in Musanze District as the school moves to becoming an international centre of excellence in police training and development.

The Head of State also officially launched a maiden Senior Command and Staff course that is underway at the Musanze-based College.

A total of 28 senior officers from 12 African countries are attending the course which lasts for one year.

While meeting officers attending the Senior Command and Staff course, the Head of State said Africans should be one in pursuit for a common course.

“It’s our continent and this is your country as well,” the President told the officers.

The course, which is a product of Rwanda National Police (RNP), is offered in partnership with the National University of Rwanda and the UK-based Bramshill College of Policing formerly known as the International Academy- Bramshill.

It gives the officers more knowledge and skills in tactical policing and offers them a global understanding of peace and conflict dimension.

“We are aware of your avow desire and passion for preference for Africa’s solutions to Africa’s problems. What is going on here [Senior Command and Staff course] epitomizes and reinforces your assertion,” Chief Supt. Victor Adusah-Poku, who represented other course participants, said.

He thanked Rwanda for extending its support to other African police forces to benefit from this maiden programme.

The Police College has been operating as a “Police academy” since 2001 and has since conducted various courses including five officer cadet and four intakes of officer supervisory courses.

Others include police station commanders and intermediate command and staff courses.

In partnership with Kigali Institute of Education (KIE), it offers bachelor’s degree in Professional Police Studies, with 72 officers already graduated from this field.

Other two degree programmes offered by the college are Law and Information Communication Technology (ICT) offered in partnership with the National University of Rwanda (NUR) and Kigali Institute of Science and Technology (KIST), respectively.

The college is in the process of transforming both Law and ICT courses into “criminology and Law” and “Information Security with focus to cyber and hi-tech crimes respectively.

In 1954, the first block was established at the college which started as a nursing school. It became a police school in 1960 but renamed Ecole de la Gendarmerie Nationale (EGENA) in 1965 until it was again converted and renamed the National Police Academy (NPA) in 2001.