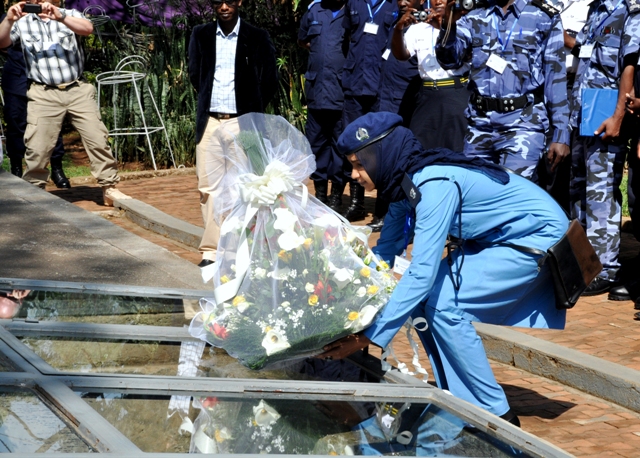 Police officers from the region attending the 39th United Nations Police Officer Course (UNPOC) peacekeeping pre-deployment exercise at the Peacekeeping Training Center in Gishari, Rwamagana District, visited Gisozi Memorial Centre to pay tribute to the victims of the 1994 Genocide against the Tutsi.

At the memorial centre, they laid a wreath in respect of over 250, 000 Genocide victims buried there. They toured various memorial rooms and were explained on how the Genocide was planned and executed.

“I have been hearing about Rwanda’s dark history where innocent people were massacred; what I have seen here today is no where compared to what I thought. I am shocked; this was really a brutal Genocide,” said Major Sarah Fadl Ahmed of Sudan.

“It is unspeakable how people killed their children, friends and relatives,” she added.

Major Sarah who is in the country for the first time, hailed Rwanda for establishing such memorial sites noting that they will keep memories of what happened alive and a way of making sure that such atrocities never happen again.

“This is a good thing because when people come and witness what took place in the country, they in the end draw strategies and commitment to fight and prevent anything that may lead to mass killings and Genocide,” she observed.

Later in the day, the officers visited Rwanda National Police Headquarters where they were explained on the force’s peace support operation status and visited the GBV medical wing – Isange One-Stop centre situated at the police hospital in Kacyiru.