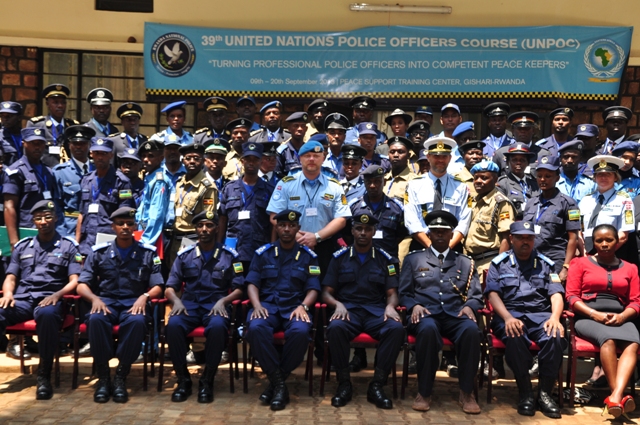 Deputy Inspector of Police (DIGP) in Charge of Operations, Dan Munyuza, while officially opening the course, asked participants to take it “serious,” adding that they are gates to restoring peace in needy countries.

He described them as ambassadors of peace and said that such a course is vital if they are to accomplish their duties effectively.

“Rwanda having been affected by serious conflict that resulted in one of the most horrendous genocide in the world, is committed to do all in its ability to ensure such atrocities not to happen elsewhere. This partly explains why, to date, Rwanda remains one of the largest contributors to peace mission globally,” said DIGP Munyuza.

He thanked EASFCOM for choosing Rwanda to conduct the course.
The officers are from Burundi, Kenya, Uganda, Tanzania, Ethiopia, Sudan, Djibouti, and the host Rwanda.

Superintendent Wanderi Mwangi, the Training and Evaluation Officer at the EASFCOM- Police Component, commended the government of Rwanda and Rwanda National Police in particular for its efforts in restoring peace worldwide.

Wanderi urged trainees to make good use of this opportunity so as to acquire skills and knowledge required of them to professionally serve to the required standard.

The Course will tackle theory and practical exercises, challenges in mission areas and techniques of overcoming them.

It will handle key issues such as the back ground of the African Union, the dynamics of peace keeping operations and the expected conduct, as well as discipline of a United Nations/ African Union Officer.