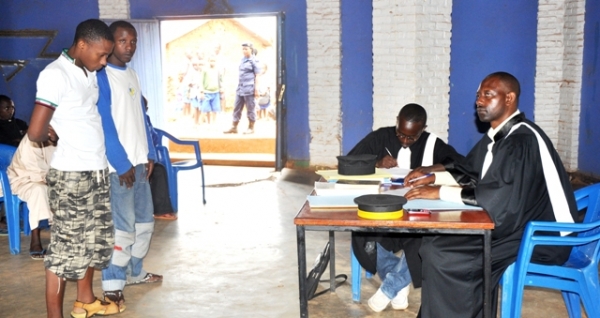 Four people, who were arrested last week in Kigali in connection with drug related crimes, were on Tuesday arraigned before Nyamirambo Primary Court where they entered a guilty-plea to consuming narcotics

The public trial held at Kivugiza Primary School and attended by students, teachers, motorcycle operators and residents of Nyamirambo, was part of the campaign to fight drug abuse, which is rated high in the country and among the youth.

Two other suspects denied the charges.

Mutebutsi, on his part, argued that he was taking the illegal drug as medicine after his colleague prescribed it to him.

He told court that he had stomach illness.

“A friend of mine told me that if I mix cannabis in tea, it will heal my stomach pain,” Mutebutsi told court.

At the time of his arrest, Mutebutsi was found in possession of rolls of cannabis.

However, when the presiding judge asked him if a person, who prescribed him the medicine was a medical doctor, Mutebutsi only said he had no idea if the substance he was using was cannabis.

Prosecution requested a two-year sentence for Mutebutsi and a fine of Rwf200, 000.

Prosecution also requested various sentences for other suspects, which are also below three years and various fines above Rwf50, 000.

The maximum sentence of anyone found guilty of consuming narcotic drugs, under article 594 of the penal code, is three years and a fine of Rwf500, 000.

Chief Prosecutor of the Nyamirambo-based Nyarugenge Intermediate Court, Mr. Rugambwa Ndibwami, also said the public trial of suspects connected to narcotics related crimes “is in line with the prosecution’s efforts to fight and prevent drug abuse in the country.”

“We want such cases to be tried in presence of the public, especially in places where these crimes were committed so that people know the repercussions of such crimes,” Mr. Ndibwami stated.

“We have concrete measures to counter drug related crimes,” he said, urging the public to maintain the cooperation with security organs to have the vice prevented.

The public trail of drugs suspects was also welcomed by teachers, students, motorists and parents, who said that it will send stern message to those involved.

“Narcotics are enemies to a human being,” Mr. Oscar Mugenga, a primary six teacher at Kivugiza primary school, who also attended the hearing, said.

“This (public trial) is a good thing. As a school, we have also strengthened measures to protect pupils from such dangerous substances,” Mr. Mugenga said.

Mr. Mugenga urged students to shun narcotics, concentrate on studies and importantly share information with school administration about anyone involved in such acts.

Jean Damascene Bigirabagabo, a taxi motor operator in Nyamirambo also echoed the same message adding that drugs are “very dangerous to one’s health” and urged people involved in narcotics and illicit drugs to “distance themselves from the life-harmful substance” and engage in developmental activities.

He appealed to fellow motorcyclists to partner with Police and other security organs to ensure that crimes in general and drug dealings in particular, are prevented.

Court adjourned the case to May 31, when the ruling will be read.

<-Back To RNP News
<script