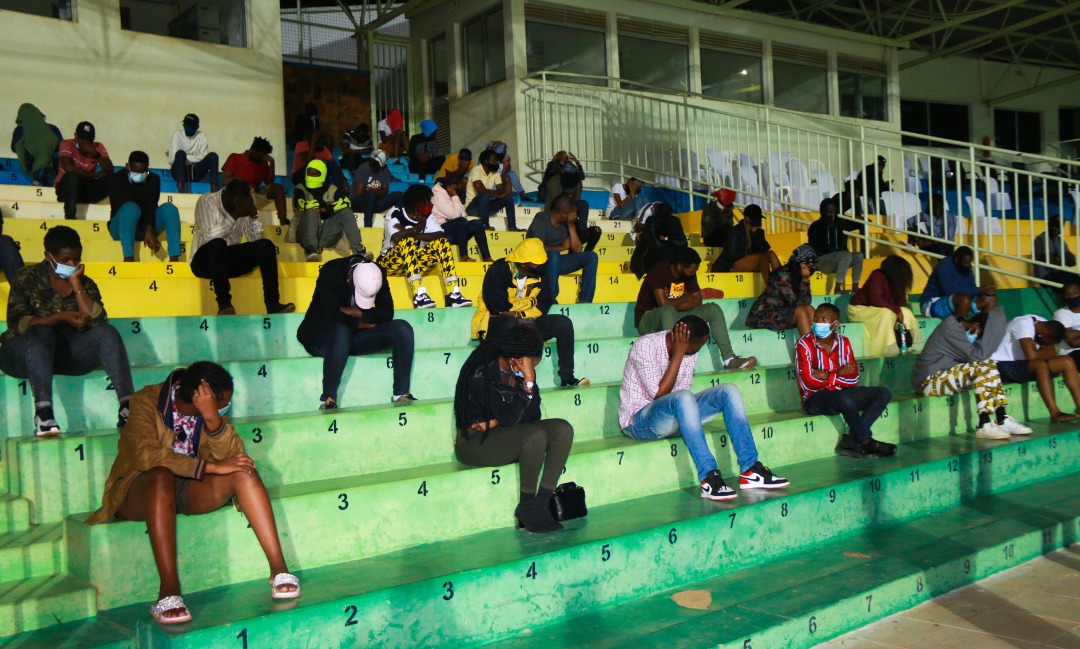 Rwanda National Police (RNP) arrested 130 people on Saturday after they were found in prohibited gathering and drinking at Laguna Motel located in Isangana Village, Ubumwe Cell in Muhima Sector of Nyarugenge District.

They were arrested during Police operations to enforce the national directives meant to prevent further spread of COVID-19.

When Police inspected the motel at about midnight, some of the violators were found in the night club dancing while others seated in big groups drinking.

About 50 of them were gathered in one of the rooms of the motel as they also engaged in social practices including drinking and dancing.

The loud noise of music and people cheering could be heard from outside and neighbourhoods. Majority of them were drunk.

According to Emmy Ngabonziza, the District Executive Administrator for Nyarugenge, besides violating the government directives, the motel was only licensed to operate as a restaurant not as a bar or night club.

Dr. Jean Musangwa, the owner of the building, who also has an eye clinic operating in the same facility, regretted the violations involving his tenants.

The DEA of Nyarugenge said that these are continuous operations and inspections to enforce COVID-19 prevention directives.

"These violations were unearthed during the night inspection conducted in partnership with Rwanda National Police targeting mainly hospitality establishments to assess their adherence to the recommended safety guidelines. Just imagine if only one person is infected; it means all the 130 people are infected and these unacceptable behaviours and actions can lead to mass spread of the COVID-19," Ngabonziza said.

All the hospitality services at the motel have been closed. It is the second time that a hospitality facility has been closed over related COVID-19 violations.

Ngabonziza called upon the general public to understand the serious dangers posed by the pandemic and ensure maximum compliance with all the safety directives and guidelines.

RNP spokesperson, CP John Bosco Kabera said that there was information that people spend the night at Laguna Motel drinking and dancing.

"The first owner of this hospitality establishment was fined over similar violations. The new owner acquired a license for the restaurant, but continued to operate the bar and night. What is  worse is that in addition to operating without proper license, the activities in the premise were in breach of COVID-19 prevention directives, especially  holding prohibited social and mass gatherings and operating beyond recommended hours.

When some members of the public gave us information, Police indeed found many people at about midnight, drinking and dancing. Although many of them tried to hide in different rooms and washrooms, there were tracked and found," said CP Kabera.

Some of the violators locked themselves in  rooms and were arrested in the morning as they came out.

He warned that among the services that were allowed to resume, bars and night clubs were not.

"All the 130 people found in the facility argued that they had booked rooms to sleep there, but how can you explain just 17 rooms with 130 guests who are not registered anywhere since the motel has no such book to register their guests as a requirement," he wondered.

Being complacent, he said, can take Rwanda back in strict response to the pandemic. He urged residents of Rwanda and service providers to exercise patience to support the national efforts against the pandemic, which is still killing people.

Besides closing the hospitality establishment, the owner and all people that were caught inside were also fined in accordance with the set instructions.