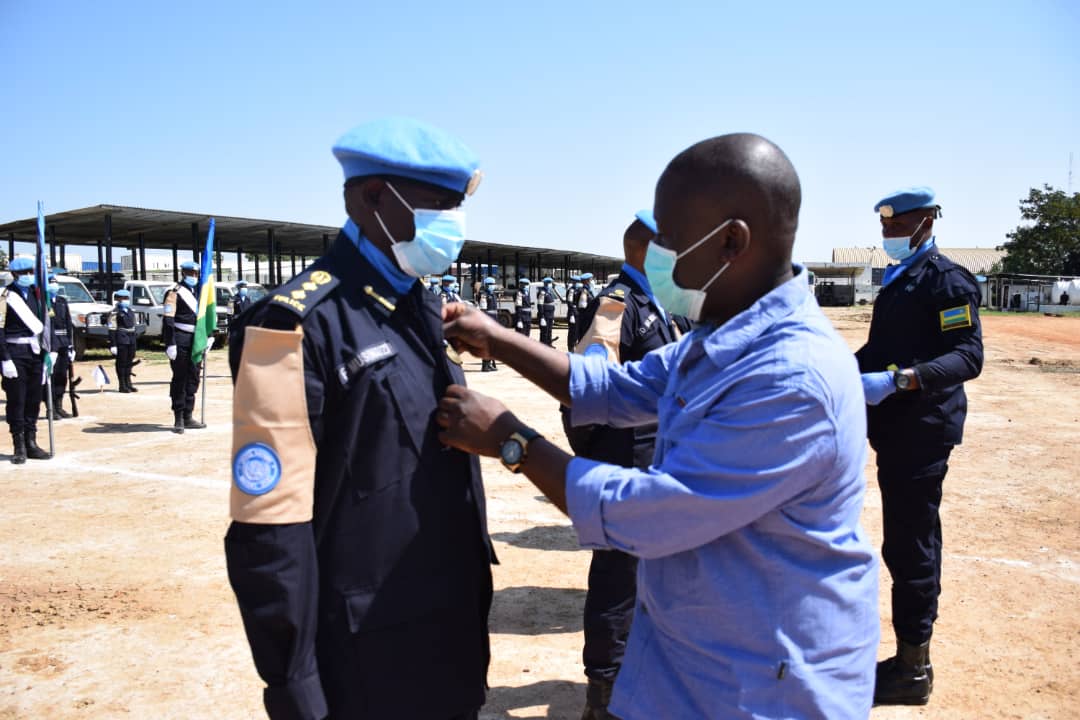 The United Nations, on Thursday, November 5, awarded 237 Rwandan Police peacekeepers serving in its mission in South Sudan (UNMISS) with the medal of service excellence.

The medal ceremony was presided over by the head of UNMISS Field Office in Upper Nile State and representative of the SRSG in the region, Mr. Enos Chuma.

It was also attended by government and other UN officials, representatives of South Sudan National Police Services (SSNPS) and leaders in Internally Displaced Camps under the unit’s protection, among others.

The decorated hybrid force under Rwanda Formed Police Unit-One (RWAFPU-1) was deployed in Malakal, Upper Nile State in December last year where they are largely charged with the protection of civilians in internally displaced camps, UN personnel, security of key installations and humanitarian assistance, among others. 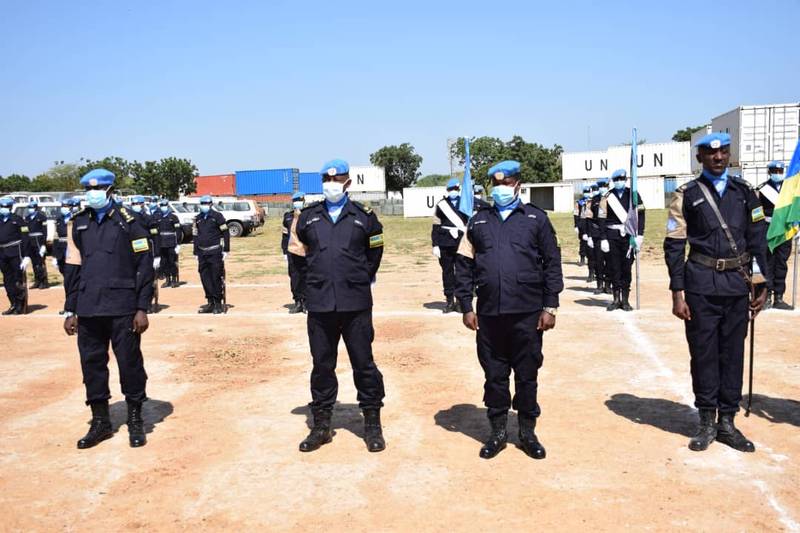 Mr. Chuma, in his remarks, expressed appreciation to the decorated men and women for their commitment to peace in Malakal, especially during this challenging period of the COVID-19 pandemic.

He noted that Rwanda placed trust in them and that they lived to that trust in the name of peace by tackling difficulties and hardships with professionalism.

“Today is one of those special days to recognize the unique contributions of RWAFPU-1 to the activities of the United Nations Mission in South Sudan. We indeed cherish and appreciate your contributions during the period of your duty in Malakal,” Mr. Chuma said.

He commended their contribution to the efficient implementation of the UNMISS Protection of Civilian (POC) Mandate in Malakal, maintaining day and night patrols in IDP camps and neighborhoods adding that they are a “strong pillar behind the UN Police visibility” in Malakal.

He further thanked the medalists for their integrity, courage and professionalism in discharging their duties and providing an enabling and secure environment for humanitarian partners to provide life-saving support to the affected civilians in IDP camps.

“You adhered to the UN core values and regulations as well as code of conduct… you have not been implicated in any allegations of sexual exploitation and abuse since your arrival here in Malakal, and maintained your moral ethics. I thank you for the wonderful service for peace, professionalism and dedicated service to the people of South Sudan. 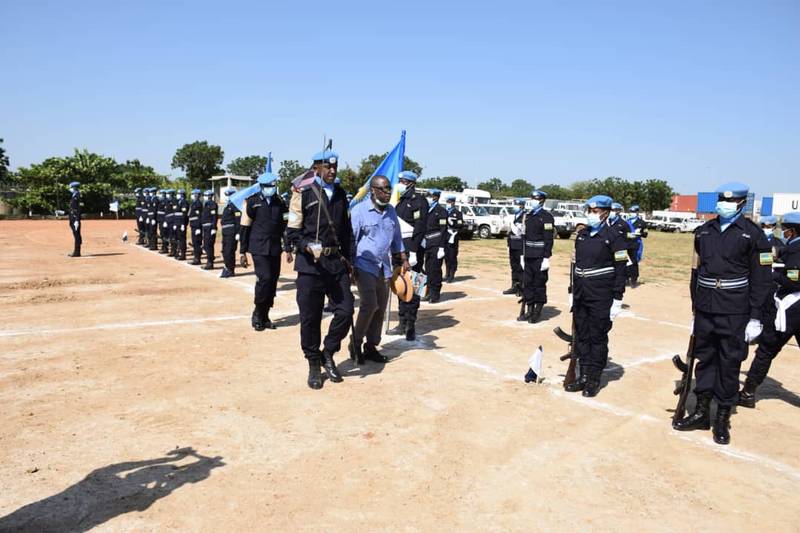 This UN Peace Medal presentation ceremony is a true recognition of your hard work, perseverance and relentless pursuit of peace,” Mr. Chuma said.

He further thanked the Rwandan women, who stand with their male counterparts in the name of peace.

“It is encouraging to always see men and women in your day and night patrols as well as guard duties. You have always put your women equally on the frontline and from all indications they have also distinguished themselves credibly in the discharge of their roles. This is reflective of your country’s global leadership in promoting gender parity at all levels of governance,” Mr. Chuma observed.

During the medal award ceremony, a moment of silence was also held in honour of late Police Constable (PC) Enid Mbabazi, who was part of the unit and succumbed to COVID-19 back in June.

RWAFPU-1 contingent commander, Chief Superintendent of Police (CSP) Fabian Musinguzi said that late Mbabazi “went out of our sights but not our hearts.”

The contingent commander noted that they inherited a more stable but unpredictable environment in Malakal but added that they worked closely with all key security partners including other military and Police peacekeepers, civilians, humanitarian agencies to provide a conducive and secure environment for the people.

“Despite the challenges encountered during our deployment, such as the COVID-19 pandemic, the harsh weather conditions and language barrier, we still managed to protect the IDPs in the POC camps and UN personnel as was required in our mandate,” CSP Musinguzi said. 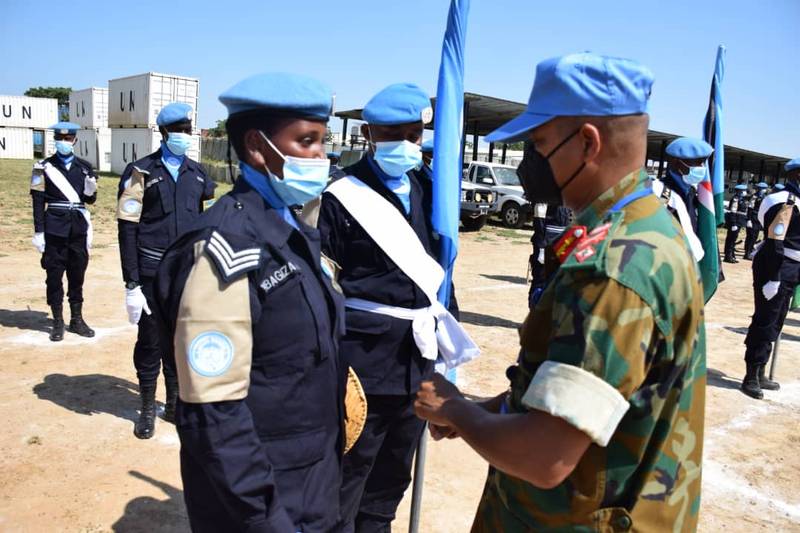 He thanked the UNMISS leadership, the government and people of South Sudan as well as other peacekeepers for the support, which facilitated them to discharge their duties efficiently.

The contingent commander further commended the commitment, professionalism, teamwork and dedication of the officers under his command throughout their tour-of-duty and pledged Rwanda’s continued willingness to peacekeeping, whenever called for.

RWAFPU-1 is one of the three Rwanda Police contingents deployed in South Sudan, all with the strength of 560 officers.