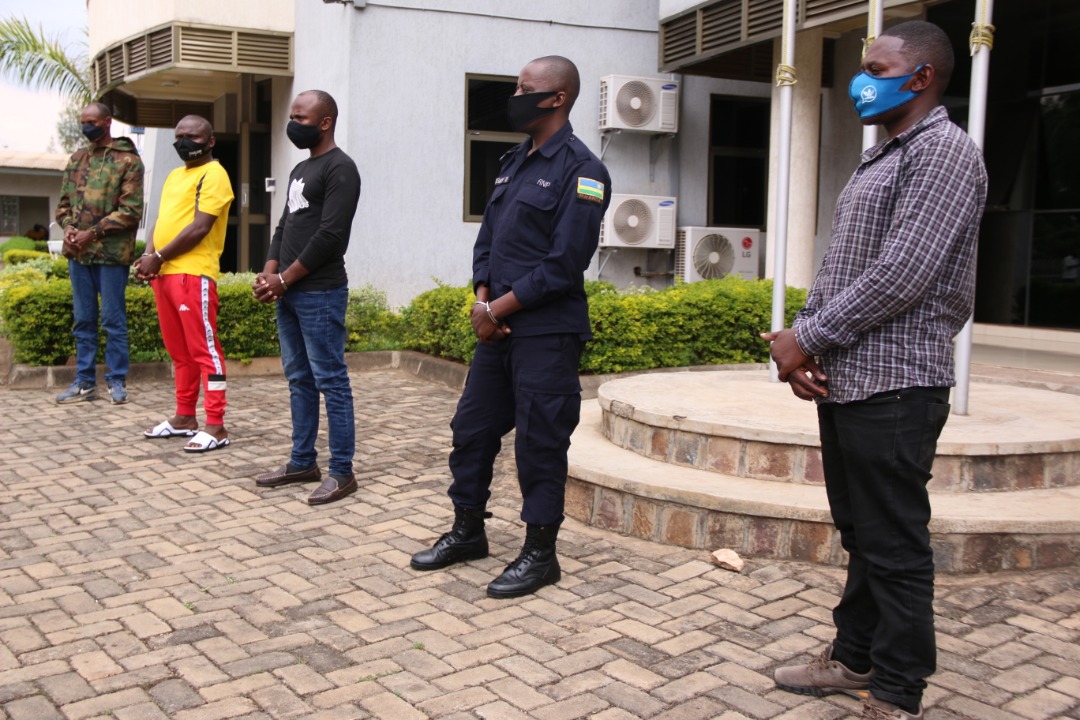 Police in City of Kigali have arrested five people belonging to the same ring, who were allegedly guising as officials from various institutions, threatening and defrauding unwitting targeted members of the public.

The five suspects were shown to the media on Tuesday, October 13, at Police Metropolitan Headquarters in Remera.

The quintet is suspected to have threatened and defrauded one Olivier Mayira, an entrepreneur and owner of Multi-Engineering and Construction Company (MECC) with offices in Kicukiro District, of over Rwf1 million.

They are Jean Marie Vianney Mugambage, who was masquerading as an investigator from RIB and head of the group; Jacques Uwimpuhwe (alias Pacific Habarurema), who was guising as an employee in the Office of the Auditor General; Deus Sengabo, who was dismissed from Rwanda National Police; Sgt Davis Mwesigye, an active Police officer and one Jean Bosco Dufitumukiza, Mayira’s childhood friend.

Mayira narrated that on September 29, he received a phone call from a man, who claimed that he wanted a surveyor, one of the services offered by Mayira.

“We linked up in Niboye where I found this caller with four other people in a car with tinted windows. One, who was wearing a Police uniform (Mwesigye) immediately handcuffed me, they put me in the car, introduced themselves as officials from RIB, Police and Auditor General, who were investigating my allegedly use of fake documents to bid for tenders, of which I had no idea” Mayira said.

He added: “After hours of serious threats and psychological torture, Mugambage, who was being addressed by all members of the group as ‘team leader’ asked me; how do you see this situation? I replied that the ‘situation is not easy’ and that’s when they demanded Rwf 3 million so as to bury the case.”

According to Mayira, when they started soliciting money, a lot of things came to his mind.

“When they asked for money, I started to think that these are conmen but again another thought came to my mind; Jean Bosco Dufitumukiza, who was with them, was helping me to submit in my tender requests and could have done something wrong in the process. However, the greatest fear was that these people could be conmen and since I know their identities, they could kill me to prevent me from revealing their identities to law enforcement organs.”

Nonetheless, Mayira and the group settled for Rwf1.5 million, which he was supposed to give them within 30 minutes after his release.

“They threatened me that if I don’t give them the money within the next 30 minutes, they would hunt me down since they know where I work and live. I first sent Rwf606, 000 on Mobile Money to a SIM-Card registered in the names of Pacific Habarurema and later handed cash Rwf400, 000 to Jacques Uwimuhwe and Mugambage.”

The group continued to press Mayira for the remaining balance, which prompted him to bring the matter to law enforcement organs and the five suspects, were arrested on Monday, October 12, as they received other Rwf500, 000.

It has since been established that Dufitumukiza had joined and sold Mayira to the ring since he knew all his moves.

It is alleged that when Mayira sent Dufitumukiza to bid for a tender for street lighting in Bugesera, the latter worked with the ring to forge some papers, which they would later use to threaten Mayira of impending serious legal actions, if he doesn’t bow to their demands.

Fraud, under article 174 of the law determining offences and penalties in general in Rwanda, attracts a term of imprisonment of between two and three years, and a fine of not less than Rwf3 million but not more than Rwf5 million, upon conviction.

Abduction and unlawful detention is punishable under article 151, with an imprisonment, upon conviction, ranging between five and seven years.

He appealed to the general public to always report such people, who call themselves employees of certain institutions and soliciting money.

“If someone tells you that he or she works for a certain institution and asks for money so as to prevent any legal actions, to get a service that should be given for free; or overcharges you for a service otherwise offered at an official standard price comparatively low; this person is committing a criminal act and should be reported immediately to fight such fraud and bribery,” CP Kabera said.