The suspects, who were paraded to the media at the Police Metropolitan Headquarters in Remera, on Tuesday, October 13, include those who had erected aerial objects on plate numbers; those who erased the red coat on plates as well as those, who bent the plates; all with intention to obscure visibility, especially when a traffic offence is committed or when the motorcycle is used in unlawful acts.

Rwanda National Police spokesperson, Commissioner of Police (CP) John Bosco Kabera said that four of the impounded motorcycles were implicated in traffic and criminal offences more than a year ago. 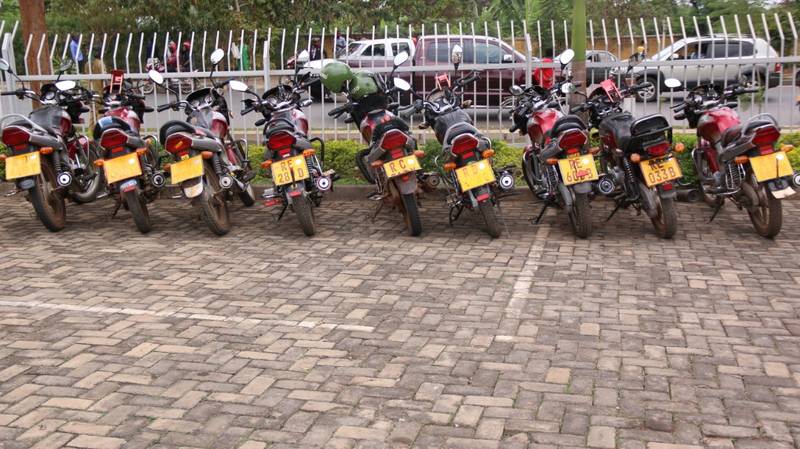 “We have received cases where motorcycles have been used in committing crimes, but recognizing their number plates becomes difficult because they removed the red coat meant for easy visibility, while others put objects on plates or curve them in a way that no one can recognize the number. Such actions, it has been observed, are done intentionally and facilitate criminality, obscures people and cameras from reading the plates, and makes it hard to trace such motos used in unlawful acts as well as suspects,” CP Kabera said.

He warned that the “operations are continuous” and will also be extended to vehicles with stealth registration numbers.

“It’s a security concern; registration numbers should be as clear as they were issued and should be easy to recognize. When you place any object, bend them, smear mud on them or any actions that prevents recognition… you will be committing an offence and you will be arrested,” the spokesperson warned.

He observed that most of the motorcycles used in illegal acts have stained or objects that block recognition of number plates, and advised those with faded plate numbers to acquire new ones.

Daniel Ngarambe, the president of FERWACOTAMO, a federation of motorcycle cooperatives in Rwanda, observed that such individuals tarnish the image of taxi-moto profession.

“Such operations help us as the federation to build a professional moto transport system as it sends a strong message to anyone hiding behind it to commit or facilitate crimes like in some cases where they have been caught in smuggling, drug trafficking as well as transporting stolen items especially at night,” Ngarambe said.

He added that the federation built a database, which helps to trace anyone or a motorcycle that was implicated in any unlawful acts.

“We work with the Police and RURA (Rwanda Utility Regulatory Authority) to ensure that such people are arrested, which ensures that the taxi-moto profession becomes the best option as a means of transport,” Ngarambe explained.