Increased public education and awareness on the COVID-19 prevention measures and individual responsiveness has played an important part in influencing positive practices and facilitating the government to effectively respond and combat the pandemic.

This was observed during the government press conference on Friday, October 2, which gave updates on the current situation as far as fighting COVID-19 and resumption of businesses in the country is concerned.

The press conference was held at Kigali Convention Centre (KCC) and brought together the ministries of Health, Local Government, Education, Trade and Industry as well as Rwanda National Police (RNP).

The Minister of Health, Dr. Daniel Ngamije said that although new cases of COVID-19 are now down to a single digit daily especially this week, the problem is still in our midst and far from over, which still requires positive practices as recommended by health experts.

Rwanda registered the first case of COVID-19 on March 14, 2020 and so far, more than 4800 cases have been registered in the country, with over 3600 so far discharged although 29 people succumbed to the virus.

"Despite the increase in cases between August and September caused by the cluster of traders in Kigali markets, we are seeing a massive downward trend in new infections due to awareness and education.

A random sampling and testing along roads connecting City of Kigali and the countryside attests to this; out of 2000 tests, only two tested positive," Dr. Ngamije said.

Increased testing laboratories from one to 12, following up some cases from homes and putting much emphasis on risky clusters, he said, all contributed to effective response. Out of about 1000 cases that were followed up in respective homes, over 600 have so far been cured.

The Minister of Local Government, Prof. Anastase Shyaka said that violations in the past week reduced further by 25 percent compared to the previous week.

The minister further explained that washing facilities were installed in the over 130 big markets across the country and commended the role played by committees in small markets, which volunteered to oversee compliance.

"Do not fear penalties; fear the virus and comply with the safety directives," Minister Shyaka said.

RNP spokesperson, CP John Bosco Kabera said that the implementation of the directives has mainly been through partnership with relevant government entities to influence positive behaviours and actions through education and awareness in the last six months.

"If it was training, we would now be in the phase of awarding certificates of merit to participants. What this means is that at this point, no Rwandan should be arrested or penalised for not adhering to the prevention directives maximally.

We are at the phase where we should not be seeing anyone wearing a facemask inappropriately; physical distancing should be a culture; 50 percent quota of passengers in public service vehicles should be a practice; washing hands and respecting the curfew should by now be a natural practice," CP Kabera said

He added that although the vast majority of residents of Rwanda are compliant, there are still observed cases of violations such as social distancing in shopping malls, isolated cases of public transport not adhering to 50% quota in their vehicles; wearing of face mask especially in rural areas; cases of pedestrians and drivers violating curfew, speeding of motorists especially towards curfew hours resulting into accidents and cyclists not wearing recommended helmets

CP Kabera cautioned businesses that continue to operate contrary to the directives, citing restaurants and other hospitality facilities that devise violation tricks so as to operate their bar sections.

"Those who place plates on tables to appear as if they are eating so as to drink alcohol, those who serve alcoholic drinks in cups and thermo flask to make it look as if they are serving tea; those who have turned their homes into bars; we are aware of these tricks," CP Kabera said.

While lauding the impact of youth volunteers in awareness and facilitating the Police in implementing the directives and overseeing compliance, CP Kabera said thaf RNP will continue to focus mainly on three aspects; working with responsive members of the public to make prevention practices a culture; education and awareness as well as arresting and penalising errant violators.

CP Kabera said that education and awareness will combine both safety against COVID-19 and preventing road accidents.

A total 678 road accidents were recorded in the past six month resulting into 283 fatalities, 395 serious injuries. 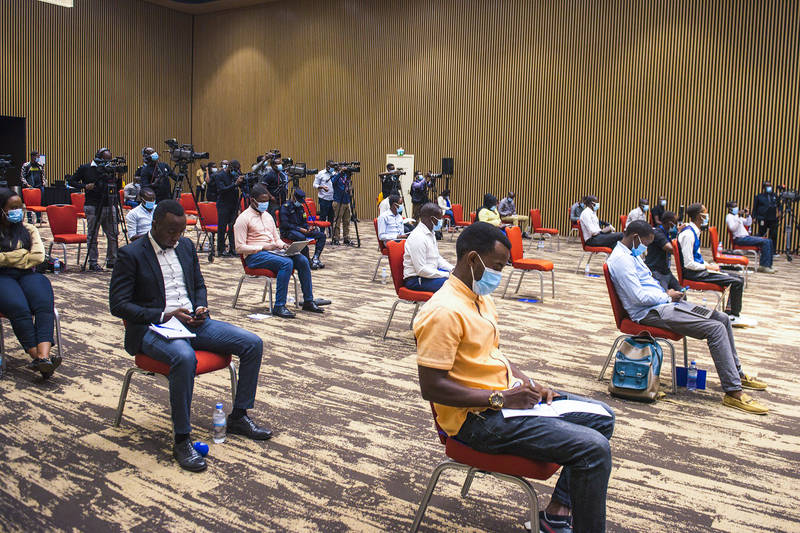 "We cannot fight coronavirus and let people in Rwanda die in accidents, that's why the awareness against the pandemic will now be combined with Gerayo Amahoro (arrive safe) road safety campaign," CP Kabera said.

In the services still closed including driving schools and driver's license test centres, CP Kabera explained that a committee was instituted to see how they can resume in compliance with the prevention measures.

The Minister of Education, Valentine Uwamariya shed more light on opening of schools starting with higher institutions of learning in this October.

The Minister of Trade and Industry Soraya Hakuziyaremye, said that bars and gaming services remain closed due to their high risks adding that institutions including the Police are working together to assess these sectors' preparedness before they are allowed to resume.