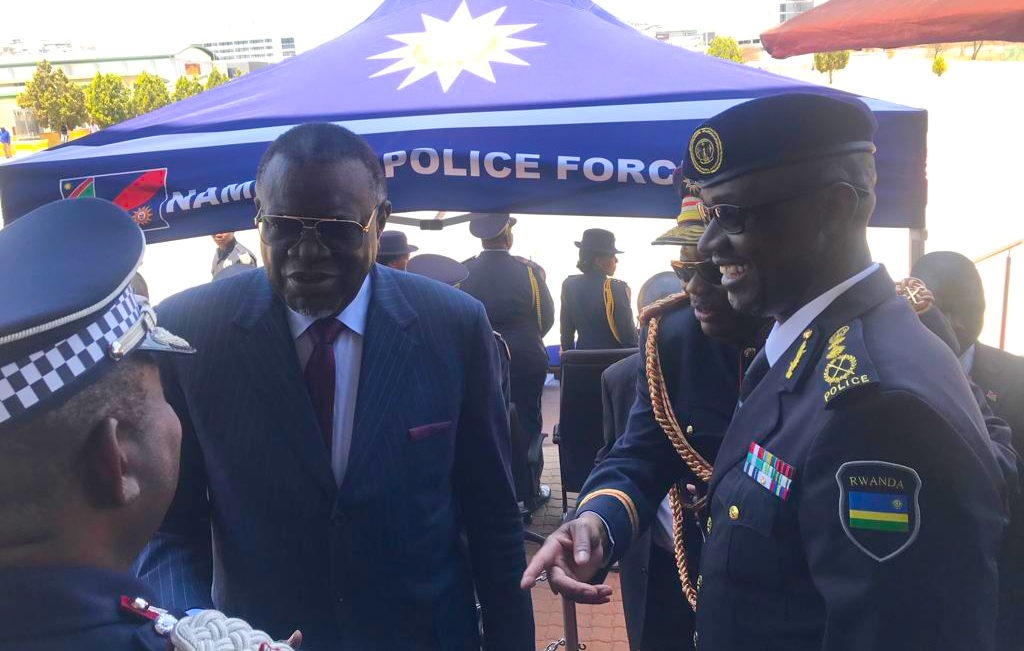 The President of Namibia, His Excellency Dr Hage G. Geingob has commended the “excellent relations” between Rwanda and Namibian Police forces.

President Geingob made the remarks on Friday while presiding over the official inauguration of the new Headquarters for Namibia Police Force in the capital Windhoek.

Inspector General of Police (IGP) Dan Munyuza attended the inauguration ceremony at the invitation of his counterpart, Sebastian Ndeitunga.

In his speech, President Hage thanked IGP Munyuza and his delegation for attending the ceremony and for the “valuable and excellent working relations” between Rwanda National Police (RNP) and Namibia Police Force.

RNP and Namibia Police Force signed a memorandum of understanding in 2015 to partner in various areas of Policing, including training, cooperation against cross-border crimes like cybercrimes, narcotics and human trafficking, terrorism and tracking of criminal fugitives, among others.

Since then, Namibian Police officers have been trained in Rwanda in varied policing disciplines including the Police Senior Command and Staff Course (PSCSC) at National Police College (NPC) in Musanze District and cadet course.  Namibian Police also trained the RNP Band Unit in basic and advanced band courses.

Cooperation is one of RNP's main focus in its pursuit for collective security in the face of an evolving security landscape coupled with technological advancement, which, on one hand is crucial for development, but on the the other, have facilitated cross-border crimes.

Over the years, RNP has signed about 40 bilateral and multilateral agreements which mainly focus on training, exchange of information, tracking of criminals, as well as other best practices.